BY LAND AND BY SEA, CONVOY DELIVERS DROUGHT RELIEF TO GOULBURN 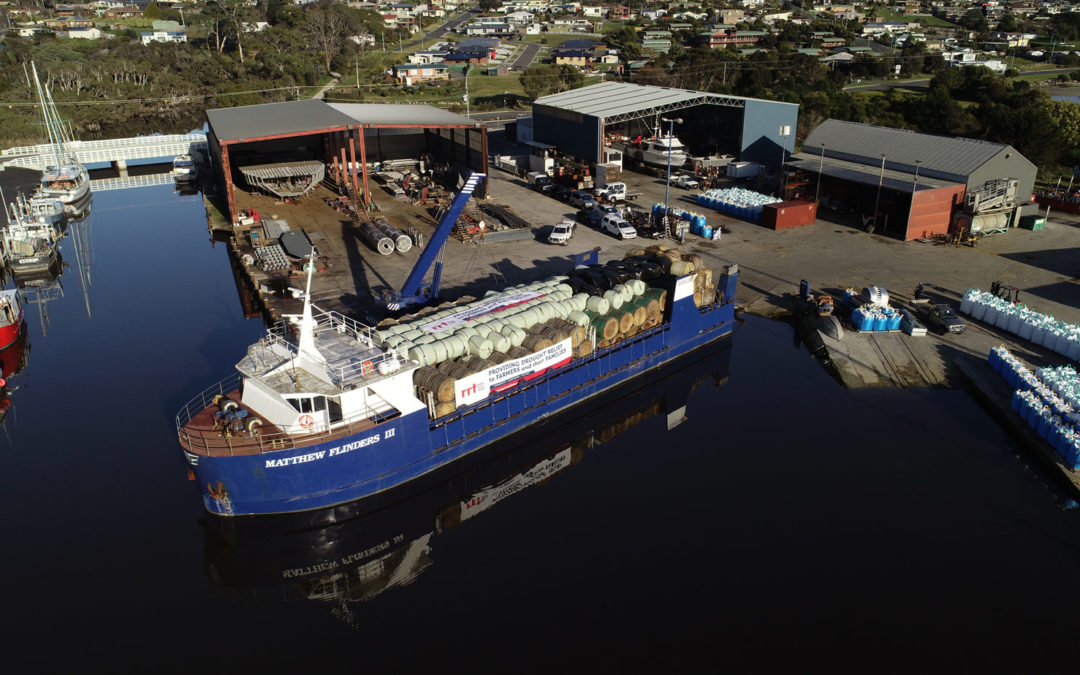 Two hundred tonnes of donated hay, and hope, has today been delivered to drought-stricken farmers in the greater Goulburn area by the Rapid Relief Team (RRT).

A barge laden with 450 hay bales traversed Bass Strait from Bridport, Tasmania, to Port Welshpool in Victoria, where it was transferred onto a convoy of 13 semi trailers and trucked to Goulburn, NSW.

The donated bales of hay are part of the RRT’s ongoing Operation Drought Relief campaign, now totaling more than $3 million.

The RRT is an initiative of the Plymouth Brethren Christian Church, which is staffed by Church volunteers who lend a helping hand to those in need.

The hay was distributed to farming families today at the Goulburn Showground.

Mick Wilson, a spokesperson for the Rapid Relief Team, said the RRT is always looking for opportunities to provide support to those in need.

“As a church-based organisation it is in RRT’s blood to rally together to support those who are doing it very tough during the big dry,” said Mr Wilson.

“The NSW Government has declared 100 per cent of the state now in drought, with experts saying it is the worst they have seen in 40 or more years.

“In these hard times, farmers and their families need a hand, and we are here to give it, this time in the form of a cross-country (and indeed, cross-ocean) delivery of hay.”

Federal Member for Hume Angus Taylor was on hand to help with the Goulburn hay drop and has supported the RRT’s broader drought relief efforts.

“My office has received calls from farmers across the district and in turn they’ve referred us to others needing help, fodder in the main.

“We know this hay drop doesn’t touch the sides, but combined with other community efforts we hope it will spur on our local farmers.

“I want to thank the Rapid Relief Team for their generosity and kindness,” Mr Taylor said.

State Member for Goulburn Pru Goward was also in attendance to show support for local farmers.

“I am so pleased to see how so many people have magnificently risen to the occasion. I thank everyone who is digging deep, the Rapid Relief Team for their hard work today especially sourcing this fodder which will immensely help preserve our breeding herds,” Ms Goward said.

As part of its $3 million + effort, in the past month, the RRT have helped over 500 farmers, and also oversaw delivery of:

For more information about the Plymouth Brethren Christian Church, go to http://www.plymouthbrethrenchristianchurch.org/