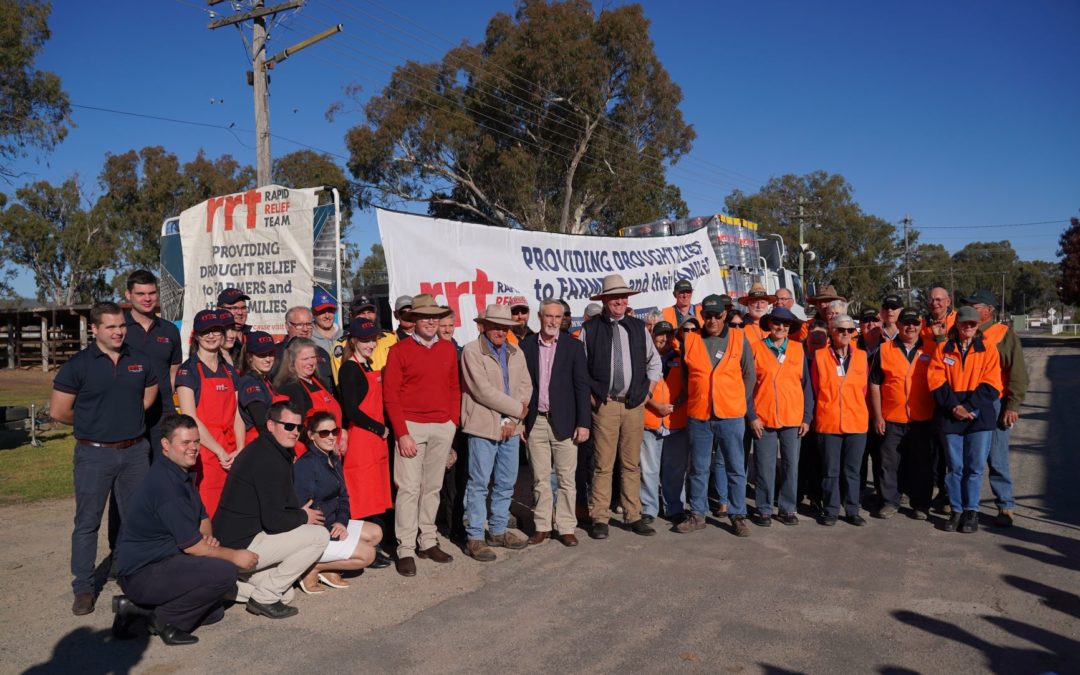 The Rapid Relief Team (RRT) has today donated 25 tonnes of fencing, worth nearly $100,000, to famers and their families who have been devastated by recent fires and drought.

Following the February fires that tore across the Tingha Plateau, the RRT has donated 24 kilometres worth of premium fencing to farmers in the Northern Tablelands.

Many of the locals whose rural properties were destroyed by fires are also battling the ongoing drought crisis that has devastated much of the state – some whom also received donated hay through the RRT Operation Drought Relief last year.

The RRT is an initiative of the Plymouth Brethren Christian Church and joined forces in Inverell with BlazeAid to help organise the donated fencing and volunteer man-power to help rebuild local destroyed farming infrastructure.

As well as the donation, the army of RRT volunteers rallied together to provide a free community BBQ for locals and volunteers at the Inverell Showground.

Lloyd Grimshaw from the Plymouth Brethren Christian Church said the RRT is always looking to support those in need.

“It is truly upsetting to see so many families, who are already battling this crippling drought, also needing to rebuild their lives after the fires,” said Mr Grimshaw.

“Our contribution is modest, but we know it is important to lift the spirits of people who are struggling as a result of natural disasters and crises, whether it be fires or drought.

“The Plymouth Brethren Christian Church values kindness and compassion – and we seek to extend this to those who need it most. We hope our contribution makes a start towards rebuilding this community and their lives.”

Mr Joyce said bushfire compounded by the ongoing drought has had a lasting impact on the Inverell shire and every loss was equally devastating.

“One person who loses a shed or has one paddock destroyed by fire is just as relevant as someone who has lost many, so I thank RRT for its continued support of those affected in the New England area,” Mr Joyce said.

The Minister for Agriculture and Western New South Wales, Hon. Adam Marshall MP, said he was proud to support his Northern Tablelands community through this tough time.

“The recent fires and ongoing drought have devastated many families in the area – and I cannot thank the RRT enough for the light that they have brought to some dark situations,” said Mr Marshall.

“The RRT have provided a vital boost to the ongoing work of our volunteers. We are grateful for their contribution of the fencing supplies – and for feeding our hungry volunteers!” said Mr. Samuel.

Amongst its many charitable initiatives, the RRT supports farmers and rural families doing it tough throughout Australia.

Only last year, the RRT ran Operation Drought Relief in response to the drought crisis, raising more than $3 million to provide much needed hay and food vouchers to drought-stricken farmers across the east coast of Australia.

BlazeAid is a volunteer-based organisation that works with families in rural Australia to help rebuild fences and structures that have been destroyed after natural disasters.