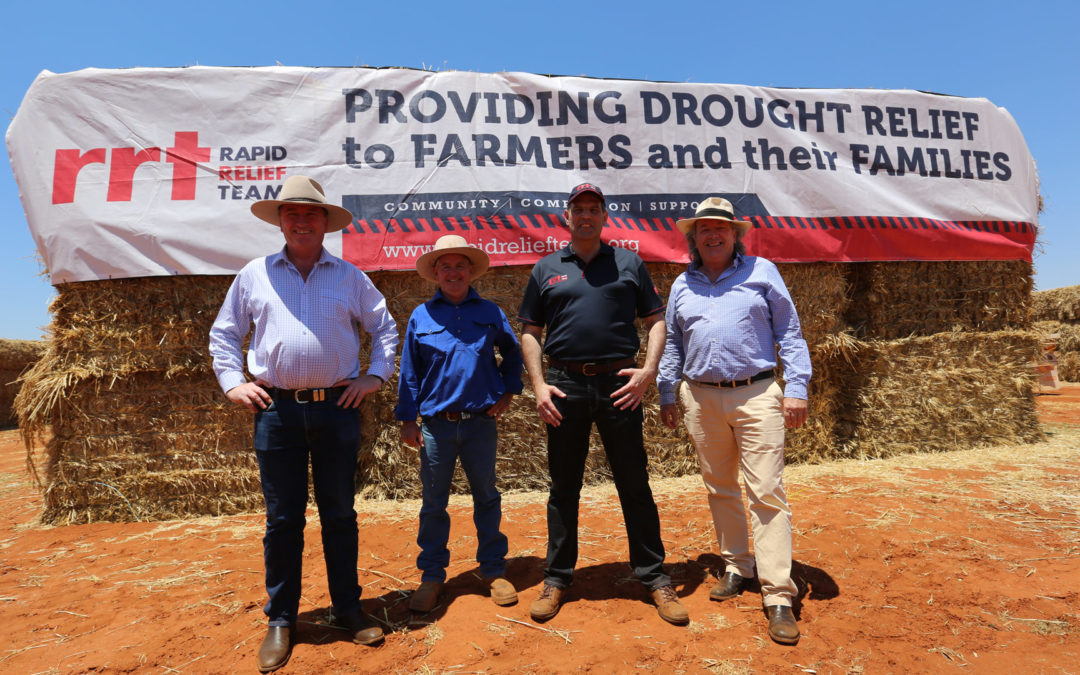 The Rapid Relief Team (RRT) has once again hit the road to deliver hay and a helping hand to drought-stricken farmers and their families in need.

At the epicentre of the drought crisis, the Charleville and Cunnamulla regions received some welcome relief this week, as 70 road trains carrying 4,200 hay bales, some 2,200 tonnes, rolled down the Mitchell Highway.

2,400 hay bales were delivered today to Queensland farmers in the wider Charleville region, with Cunnamulla farmers-in-need to receive a further 1,800 bales on Thursday 15 November.

The donated hay originated in South Australia and Western Australia, travelling on 70 road trains across the outback past Uluru, making their way to the drought-plagued region of Southern Queensland.

As well as the Charleville and Cunnamulla deliveries, donated hay is also being delivered to the drought-stricken areas of Coolatai, Walgett, Felton and Nobby.

These latest deliveries are part of the RRT’s ongoing Operation Drought Relief campaign, which now totals over $3 million. Every single dollar raised as part of the campaign goes directly to farmers in need.

The RRT is an initiative of the Plymouth Brethren Christian Church, which is staffed by Church volunteers who lend a helping hand to those in need.

Volunteers from the RRT have also been in town, hosting a free community BBQ for the people of Charlevile.

A spokesperson for the Rapid Relief Team, Lloyd Grimshaw, said the RRT is always looking to lend a helping hand to communities in need.

“Across the country, drought is making it tough for our Aussie farming families and we need to make sure they know they aren’t in this alone,” said Mr Grimshaw.

“We’ve been working closely with Coordinator-General for Drought, Major General Steven Day, and Special Envoy for Drought Assistance and Recovery, the Hon Barnaby Joyce MP, to see where we could lend a hand and some hay, and bring a little hope.

“When the Federal Drought Taskforce pointed us toward the Charleville and Cunnamulla regions, we were more than happy to pitch in and do our bit and deliver some relief.

“As the load has traversed Australia, it has seen the sites – even trucking past Uluru – but its biggest welcome will be when it gets back to the homes of our farmers in need.”

Barnaby Joyce MP, Special Envoy for Drought Assistance and Recovery and Member for New England, was in Charleville to see the hay roll in.

“Our farmers work day and night to deliver for us, and its only right we do the same when they are in need,” said Mr Joyce.

“The Federal Government recently announced a $5 billion Future Drought Fund to help prepare for the years ahead, in addition to $1.8 billion in immediate relief that has already been announced to help our farming communities get back on their feet. But what is wonderful to see is that this mantle is being picked up nationwide.

“Organisations like the RRT are making a great contribution to communities around Australia, and I’m sure the Charleville and Cunamulla communities join me in thanking them.”